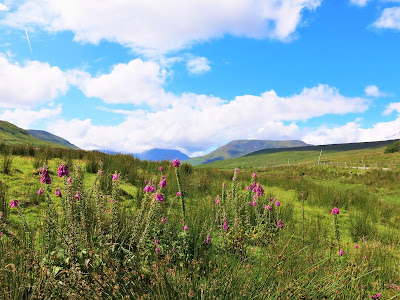 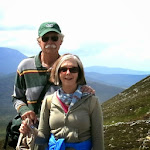 
I'm sure I've mentioned him before.  His name is Tom Coyne and he's a writer, golfer, and professor of English.  In 2007, the first year Candee and I visited Ireland, Coyne embarked on an extraordinary quest - he would walk the entire coastline of Ireland and play every golf course he encountered on the way.  Estimates of the length of the Irish coastline vary, but one would be safe to accept the statistic of the Ordnance Survey of Ireland which places its length at 3,171 km or approximately 1,970 miles.  And, of course, that's just the coastline itself, not the many bobs and weaves that would be required to reach many very remote courses.

I doubt if you remember my posts from 2007, or that you even read them in the first place, but 2007 was an abysmal year for weather.  We were in country for 21 days; there were torrential downpours in 20 of these days.  I remember noting that the weather created an opportunity for us to learn a novel Irish turn of phrase - "high stool weather."  I had to inquire - you would have probably intuited - but it indicates weather in which you find a cozy pub, climb up on a "high stool" to have a pint or two, and wait for the weather to pass.  It was high stool weather indeed.  These were the conditions facing Coyne as he engaged in "a long walk in search of a country, a pint, and the next tee."  The title of his subsequent book was A Course Called Ireland.

I have returned to this book a number of times as I get to play some of the phenomenal courses in our area in order to get Coyne's thoughts and observations of his experiences playing these tracks.  And I have learned that notoriety doesn't necessarily equate with quality.  If you're an avid American golfer wishing to play the best Irish links courses, the names you'll hear first will be Ballybunion, Lahinch, Old Head, Tralee, Waterville, TRUMP Doonbeg (notoriety of a different sort - sorry the caps are required).  No reason to denigrate these places - they're certainly wonderful golf courses.  But I can't help but think that so much of this view is fueled by aggressive marketing over a long period of time.  Similarly, if you're coming for a general tourist visit to Ireland, you'll be directed to Co Kerry - the Ring of Kerry, the Dingle Peninsula - the town of Killarney, the Cliffs of Moher, Blarney Castle.  I may be biased after so many visits to this magical area, but I'd put Co Mayo up against any of these areas.  I'd pick Westport over Killarney any time, and Connemara (Ballyconneely), Carne (Belmullet), and Enniscrone in preference to those more famous courses.  Again, aggressive marketing by the folks down in Kerry. After all, we're not eating MayoGold butter in the States...

And Coyne's assessment of Carne - known to locals as "Belmullet," the town in which, and peninsula upon which it's located?  It is number one on Coyne's "biased and unscientific ordering of Ireland's golf courses according to the courses I would walk back to first."  Ballybunion's Old Course was listed second. 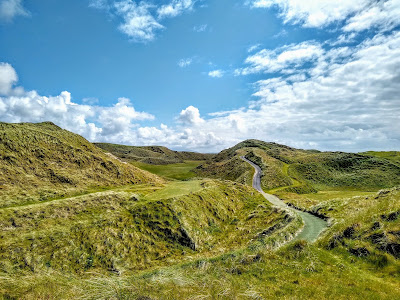 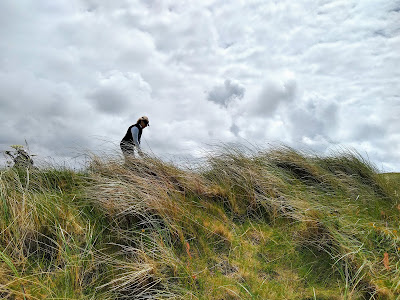 Here are Coyne's thoughts about playing Belmullet - "Carne was brilliant.  Simply brilliant.  Front, back, first hole, last - every mound, every swale, every inch of the place was special.  Granted, we played in a light breeze under clear skies with a blazing sun warming our shoulders, and I finally happened to hit the ball like a golfer instead of a tired bag of blisters.  But it was more than the conditions that had me understanding what Mr. Hackett (Ireland's most famous and prolific course designer) was talking about when he called Carne the greatest canvas he'd ever been given.  It was dropped smack in the heart of the lovely Irish nowhere.  No hotels to catch your eye, no traffic to rattle your focus, no summer homes stuck to the side of a glen like they might crash down upon your fairway.  We got lost in Carne, wonderfully so, and for all its blind shots and vanishing fairways, I never felt tricked.  I had never played a golf course that felt as wild but played as fair as Carne. 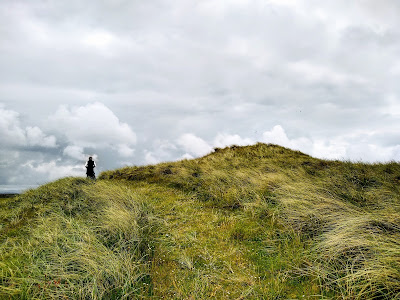 "It seemed as if the golf gods were busy lipping out someone else's putts when I found my tee shot on number eleven, a short par-four that hooked its way around a behemoth sand dune.  Having slapped my drive toward a rightward death, I tightened up my bag and set out to scale a bristly dune wall, eventually arriving at a grassy peak from which all the greens and blues of the Belmullet coast were in view.  And so was the white of my Titleist, my ball sitting atop a tuft of grass as if the sand hill was simply the tallest tee in Ireland.  I'd taken an inadvertent but unbeatable shortcut, the green sitting fifty yards below my feet, and dropping the ball onto it was as easy as hitting the pool from a high dive." 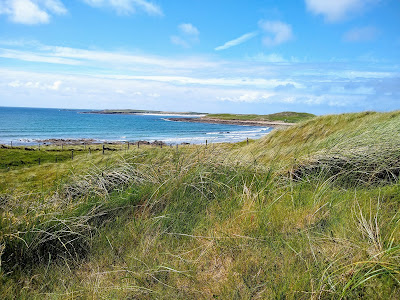 Although I certainly don't have the golf skills or the course acumen of Tom Coyne, I can wholeheartedly endorse his feelings about Carne.  Just a very special piece of land, squeezed between the Atlantic and Blacksod Bay, in a stunning setting.

And I played relatively well, remaining competitive with both Marion and Padraic, until Marion went on a tear and got almost as many Stableford points on the back nine as Padraic and I had on the full eighteen.  The woman can play... 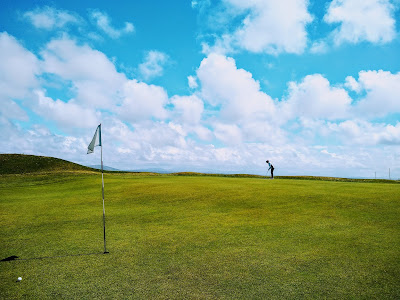 And eleven?  I hit my drive of the day - well-struck and exactly in the direction Padraic suggested, feeding left to right down the fairway, avoiding the "behemoth dune on the right" and giving me a clear shot to the green.  A muffed second shot, the third on the green, and a routine two putt for a bogey and two points on the card - just fine.

So, it was a great day out.  An hour and a quarter drive from Westport, time for a coffee and scone before the round, and a relaxing ride home reflecting on the day and enjoying the great good company of our friends.

I would highly recommend Tom Coyne's several books.  A Course Called Ireland was terrific; his new book A Course Called Scotland might even be better - didn't walk the coast of Scotland but did something perhaps more impressive - no spoiler alerts here...  He's currently playing golf all over America for a book entitled - oh, I bet you can guess.

Posted by Milseain In Ireland at 1:42 PM

As I said on the Instagram post, the is "ruggedly beautiful". Amazingly beautiful works too. Happy you and the golf gods were sympatico that day. Play on laddie.